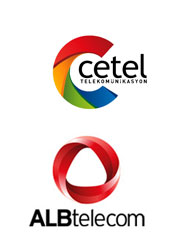 Cetel as is the part of Calik Enerji, owners of AlbTelecom

Let’s start by making something clear. I like the turkish people! Beside the fact that they are hotblooded (just like us, the Albanians), they are one of the most entrepreneurship persons you can find in the world. That I learned in a seminar in Turkey a couple of years ago (and it was not a turkish statistic!?). It was the Germans that has first noticed the ability of the Turkish to take risks and initiate new businnesses.

I won’t talk about the turkish restaurants and the turkish small business around the Europe. They have done a great job and they have practically mastered the market. Instead I will talk about a big turkish company in Albania.

Four years ago, AlbTelecom (Albanian Telecom), the albanian core service provider for telephony services was sold to Çalık Group. The AlbTelecom was considered a pearl from the albanian public companies that were placed for sale from the Albanian Government. The company was the only licenced telephony  provider (a monopol) and the only Internet backbone company in Albania. In a roten communist country as my country was, there was not so much space for innovation or smart investments from a state company. Selling Albtelecom was an expected move and everyone was hopping to have a new foreign player with a will for investements and innovations. (We also loved the fact that a Turkish and not a Greek company has entered our communication market. Vodafone and AMC, both part of Panaphone and Cosmote Greece have been operating in the Mobile Telephonie for some years in Albania.)

History of Telephony in Albania

Having a phone line in the ’80s in Albania was luxury. The phones at home, were a privilege of the highest communist party members, the highest directors and you rarely could find someone else having a phone home. The situation was the same even in the late ’90s, I remember walking to my best friends house, just to call my girlfriend asking her about goingout plans. If this sounds strange to you, read out the next sentence. In year 2004, when we had to change office for our own software-developing company, we were unable to get a fixed phone line. Although we had Cell phones, I could not get a fixed telephone line for my company. I had to ask everyone I knew around to finally get a telephone (after 4 months) just because my father-in-law “knew” somebody in the AlbTelecom. (And I am feel terribly bad as I write this line).

This is how they do it!

Happy enough we started making business cards, flyers, and publishing the phone number on all the websites we own. We also run some advertisements in a National Television and of course the phone number was part of the TV Messages. For five years, we have build a little bit of marketing around that phone number and the customers called there for problems or new projects where our assistance was needed. Everything looked fine until last month …

I called back in the company from Germany one day and I was surprised to get a female message saying that “the Phone Number has changed”! Changed? I knew that one extra digit was inserted some time ago but I was sure to have dialed the correct number. I switched to call a Mobile line of my brother who runs the company now. Also confused he informed me that they have cut out the phone line without any notification. He has called to ask for the reason and he was informed that this was not a defect. AlbTelecom was changing some phone lines and also the telephone numbers in the area. I felt really frustrated. I realized that they are creating chances for more phone numbers in the area. That was expected, but shutting down company phone lines is heavy damaging. All those marketing costs, all that down time is killing for a small company. And yet there is nothing to be done.

I call this a turkish was of handling business! I could not imagine even an Albanian company, or a company from another country dealing with this situation in this manner.  Showing no respect for your customers is terrible. I know that Phone Numbers, just as domains can be re-routed and although it is not easy, it is not impossible. Frustration does not help, I tried to forget about the issue and move on with a new phone number we got. At least we got that within 15 days. Let’s forget it I said. Change the marketing materials, change every trace of the old phone number. Notify the clients.

I almost forgot about the old phone number when one day I had a customer and friend of mine (it is nice when customers become your friends) telling me that he tried to reach us on the old office number. I was about to smile and explain when he interrupted: “A family has your phone number. At least they were nice!”

A family? Within 15 days the AlbTelecom has reallocated our old phone number and assigned it to a family!!

I really hoped that they were a nice family. I did not want to imagine if some clients call and some rude and unpolite persons shouts them in the other side just because he was midday sleeping and he got bored from these phone calls. Hoping!

Well, here is the end line. Surrender. Opening a case is time consuming and justice does not yet understand the customer rights in my country. Complaining will not work as this is not a mistake from a departement of AlbTelecom. It is a principle of the company that they do what they want and how they want it.
At least I can write this blog in English and hope that it will pop up on the search terms for AlbTelecom or Cetel and Calik Group. Maybe some (young) executive will see it and take some time to reflect on the customer rights in the future.

P.S In May (’09) I also got married. Just one day before my matrimony, my home phone line was cut down with the same message (and no notification). “This phone number has changed”. Pitty, those days before you get married you are happy because everyone calls and congratulates you about one of the most important dates in your life. Especially those friends and relatives that where unable to attend but want to share the joy with you. I left few days after my wedding and there was no signal at my home. Today is 5th of June and my family has no phone yet. Mom, I will call you later, when AlbTelecom pleases.